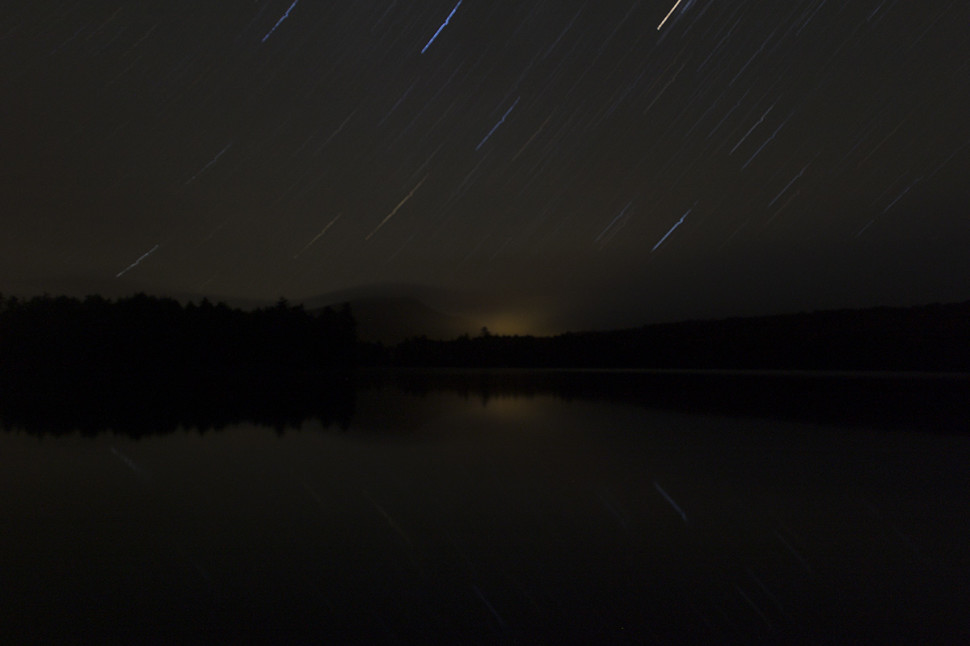 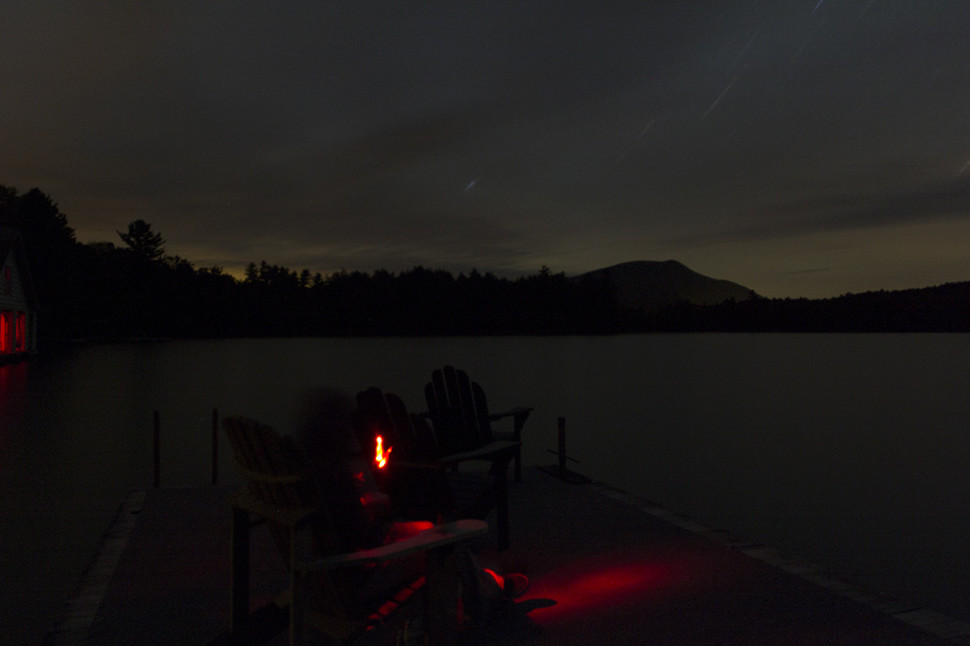 These photographs try to capture tranquil nighttime moods at a small lake in New York’s Adirondack region. Over the course of a 4 weeks artist residency at the Blue Mountain Center I went out at night to shoot long-exposure photographs. The images change with the moon phases and the weather – at first dark moonless nights, where stars appear as stripes due to my long exposures, then overcast skies and later with the moon illuminating the landscape, or a vibrant light source in the image itself. With this series of photos I tried to emphasize the country-like setting and simple lifestyle that has been preserved in this region for more than a century: rustic-style buildings, built from the local wood, creaking boathouses that sway in wind and waves, wooden piers reaching out into the water, populated with deckchairs, lonely canoes bobbing on the water’s surface. I tried to emphasize these human elements through lights, giving them a slightly eerie, if not ghostly appearance. Car lights are visible as stripes in the distance, as they are traversing a little bridge, canoers used flashlights to make their boats glow in the long exposure shots, and I carry a flashlight while walking on the shore.

I wrote short vignettes about my experiences being out at the lake late at night.

Smoke on the Water

Actually it’s steam, not smoke – but “smoke on the water” just sounds better. I discover it by mere accident after dinner one day. Before I even started my night shot photo series. It’s a cold day and the night promises to get even colder – the forecast predicted frost. I walk down to the pier in the darkness – it’s pitch black, there is no moon. Once my eyes have adjusted I see white steam rising up from the water, lots of it, rolling slowly, and spiraling up. I shine my flashlight on it, and it’s amazing, bizarre, eerie almost. I try to film it from the tripod, but the flashlight doesn’t deliver enough light. I get a photo lamp, which illuminates the steam closest to the dock, but doesn’t offer a view into the depth of this magical event. I need a beam light. Flashlight type, but much stronger. A car headlight would work. I ask for a slide projector the next day, as I assume it would do the job. I find one with a broken bulb. I exchange the bulb, and have it all ready for the night. However, in vain. The magic never happens again. And then it does – my last week. I am prepared this time – venture out to the boathouse with the slide projector, tripod and camera. I take the lens out altogether and shine the bright lamp across the lake. The steam swirls, drifts, comes toward me. It is beautiful. I film it, can’t get enough of it.

The lake is calm, completely motionless – a mirror. Clouds. Only very few stars peeking through. The brightest ones, and where there are small gaps in the cloud cover. I stand on the deck for a very long exposure – 15 minutes, and it seems too short still. So I do it again with a smaller aperture and 20 minutes. Just when I’m about to close the shutter a car drives across the 2 little bridges over the canal that connects our lake and the next one. I catch it and it looks exciting. A stream of light in the far center. I open the shutter again for the next shot. I have 20 minutes and I know it will be enough. I walk over to the boathouse, guided by the red light on my headlamp only – as to avoid light pollution to the camera. The single canoe is in the first slot. I am worried the electric light outside the boathouse might cause too much light disturbance, so I turn on one of the flashlights hanging on a pillar, facing down to the ground. I get a life vest and a paddle out of the little room and climb into the smallest boat. I make sure to take the second flashlight with me. I push out of the slot and paddle backwards. The water gives no resistance, it’s as smooth as butter. The air is still, hence no current at all. I push out into the dark, trying to focus my gaze on the boathouse and the pier as they start being consumed by the night. If it weren’t for the upside down flashlight I wouldn’t know at all where to go back to. I had hoped to see the camera on the pier, but I can’t.

The night is very dark, calm, motionless, no sounds, not even the water. I lose sense of space and distance. How far out am I? How far is the opposite shore away from me? I can’t tell at all. The boathouse seems small – as though it were very far away. The flashlight I left behind is reduced to a mere shimmer. At some point I lose it altogether.

I try to position myself so I’d be in the shot, not too far and not too close. I stop paddling, then turn on the flashlight and shine it around the little boat – to illuminate the front, then the back and over again several times. I can’t see anything outside the boat now at all. My eyes can only detect the light. Yet at some point I see a leaf in the water and become aware that the boat moves. I turn the light off and look for a new position – this time further in the distance. I illuminate the boat again, then make my way back to the boathouse, toward the flashlight, into my slot. I walk back to the camera on the pier. Timing is perfect – 20 minutes sharp. I close the shutter.