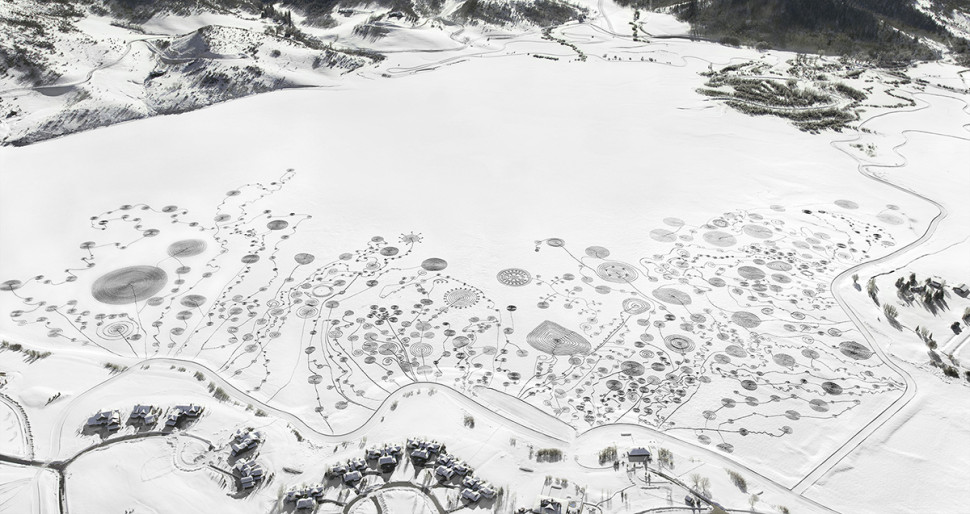 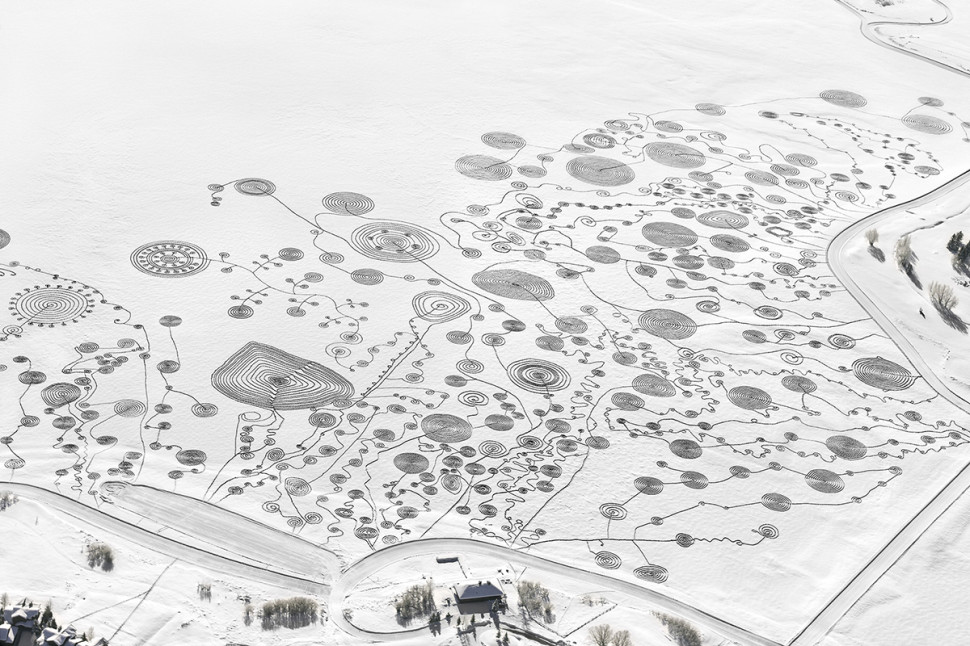 Snow Drawings at Catamount Lake was created during the 3 days between Friday February 1st and Sunday February 3rd 2013 in a joint effort with over 60 volunteers from Steamboat Springs and vicinity, who helped me walk giant spiral patterns with snowshoes . Despite deep, heavy snow that made walking difficult and strenuous we managed to create a stunning art piece on the frozen snow-covered lake. I was greatly impressed of the piece that revealed itself when I flew over the lake the next morning to take photos.

Snow Drawings is an ongoing project where I “draw” large design systems in the environment by walking lines into fresh snow surfaces with snowshoes. Ideal “canvases” are deforested areas and frozen lakes. The finished pieces are ephemeral. While they take hours to create, their duration is entirely unpredictable.  Sometimes they are coated over by new snow shortly after completion.

This project began out of play during an artist residency in the Colorado Rocky Mountains. I started designing patterns in my mind, which I then transferred onto the snow. My designs have since become much more elaborate and refined, and I have continued this project in other landscapes across the USA.

During the past 2 winters this work has evolved into large social practice art events. Working with community has enabled me to create monumental pieces while at the same time engaging people in fun outdoor winter activity in stunning landscapes. I have so far conducted two major community art pieces; in 2012 at Rabbit Ears Pass in the Western Colorado Mountains and in early 2013 on frozen Lake Catamount; both of them in collaboration with the Steamboat Springs Arts Council, the Nature Conservancy of Colorado and the Steamboat Springs Public Library. We created large drawings that could only be seen from the air in their entirety – and only for a few days. New Snow Drawings community projects are planned for early 2014, in Colorado, in Illinois and in the French Alps, where I have been invited to participate in an arts festival.

The creative process itself constitutes a significant part of this work. It is important to me that participants experience the elements of nature while they help me transform their own familiar snow landscape into a piece of art. I hope that the aerial photographs that I take right after completion of each piece can demonstrate also to a larger audience how the landscape is transformed into a piece of art through a system of designs. This changes our perception of the landscape and accentuates the beauty and magic of the natural environment, and thus inspires awe and appreciation for art as well as for nature. I deem this important – especially as modern society becomes increasingly disconnected from the natural world.

As an environmentalist it is important to me that my interventions in nature are subtle and leave no lasting traces. I am not interested in creating lasting artworks, as I believe that our world is over-saturated with man-made products. I like to unfold my work into large immersive experiences, however I prefer that it live on in its documentation only, and – hopefully – in the memories of my audiences as well as those who participate in the creative effort.

Snow Drawings has received significant press; the project was presented on numerous art, design and culture websites, and written about in magazines, including SOMA Magazine, TRACCE (Italian Archeology Magazine), and a Chinese Art Magazine. They were featured on NPR, MSNBC, The Discovery Channel and public TV Tokyo. Photographic prints and video have been shown in exhibitions in California, Colorado and in Europe. Snow Drawings 2013 was awarded First Prize by the Piedmont Art Center in Piedmont, California.