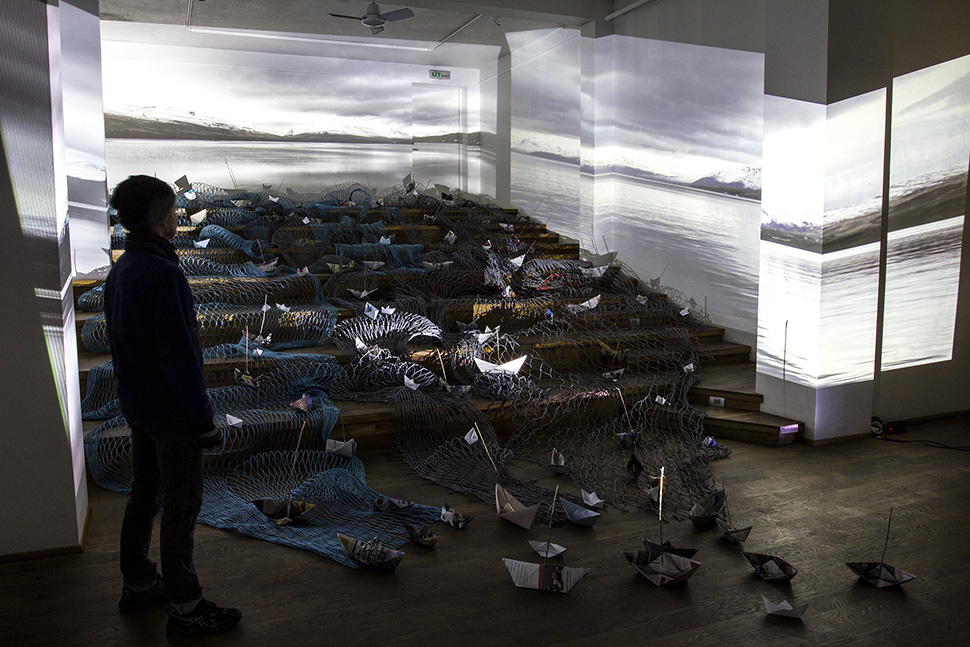 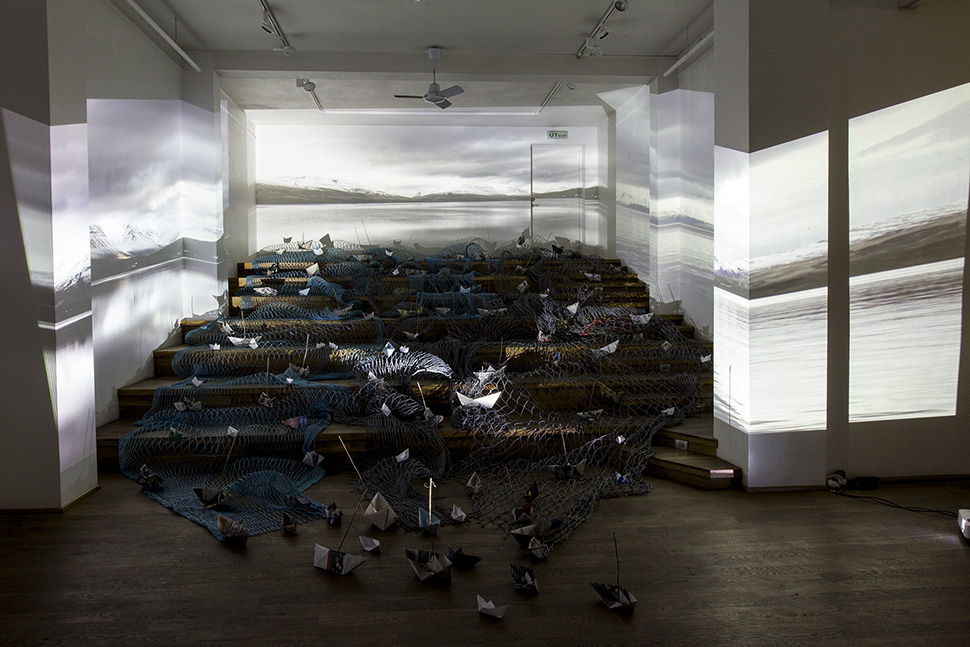 This video installation was created for an exhibition in Iceland at a cascading gallery space. It reflects my impressions of the Nordic Sea, the abundance of water in Iceland and the history and mythology of the Norse/Viking population – which used to be entirely tied to the Sea. Fishing their main sustenance Viking life evolved around seafaring, storms, floods and other disasters.
Reading the Teutonic creation mythology, earth and everything on it – vegetation, animals, the sky – were formed from the giant Ymir’s body. His skull became the firmament and his brain was tossed up in the air to become clouds. Clouds are ever-present in Iceland, sometimes forming dramatic formations, only to change or vanish entirely 10 minutes later. The clouds seem to be teasing – hence the title of the piece.

According to the Norse belief system the clouds are created from the giant Ymir’s brain – which godfather Odin and his brothers Vili and Ve tossed up into the sky to become clouds.

Having observed Icelandic clouds, I realized that they are moody. Their moods direct the light of the sun, the temperature on earth, rain, snow and winds. Sometimes all of these conditions follow each other within short succession. I have been taking on and off sweaters, jackets, scarves, gloves, hats and socks – sometimes several times per hour. Are these voluminous bulging brain-clouds actually thinking? Is it Ymir playing tricks on us? Or have they gone astray like lost boats bobbing in the Icelandic Sea, and their thoughts are wandering freely as they please?

Interestingly the Teutonic concept of the world suggests that everything on earth, including each individual’s life is pre-ordained. This raises questions about the human race, the earth we inhabit, and where we are actually heading – especially during a time of social upheaval and increasing political instability – a time when people have become selfish, taking advantage of other people: the rich of the poor, the educated of the uneducated, rulers of the common man, and corporations of everybody within their reach.

Where one race tries to dominate over another race, and one religion over another religion, one ethos over another ethos – victimizing, shaming and persecuting those who do not belong.

Iceland has seemed tranquil – like an oasis of peace and environmental soundness, where there is energy and water in abundance – hot as well as cold.

Yet it is deceiving. Iceland’s glaciers have been melting, the fish has been diminishing, climate is changing here as well – and rapidly so. Coming from California, I enjoyed my first week here at 25 degrees. Yet, it is with reservation – as I am told this is much too warm for May – and that this past winter had very little snow. Northern fjords have not been frozen solid since the 1970s.

Norse philosophy believes there will be an inevitable end to everything – and there is nothing we can do to prevent it. A grand inferno will rage and then sink all land into the sea, and finally everything will be swallowed up by an enormous wolf. An apocalypse, an armageddon: Ragnarok. It will make way to the original void that was before anything was: Ginnungagap.

Looking at the beautiful, innocent mountains and the tranquil sea, which has nourished the Icelandic people throughout centuries, all of this – as well as the world’s turmoil – seems far far away. Yet, I wonder… Do those clouds know more than I do? More than all of us do? The clouds made from Ymir’s brain? The one who was first, and whose body was sacrificed to create everything that is – our universe.

The Clouds – Are They Actually Thinking? – sample from Sonja Hinrichsen on Vimeo.